Early in September, I came across a piece on the Internet that reported a statement by the BBC regarding its policy on climate change.   I read it and moved on: happier at the content of the piece but I failed to note the reporter/date/source.  A search a fortnight later through up a report in the Guardian and on Huffpost.  These reports cited Fran Unsworth admitting that the BBC gets it wrong on climate change too often. In the immediate future training would be given to journalists, and programmes no longer had to seek ‘balance’ but could report climate change as fact. The analogy used was that the BBC reports sports results as fact, and no counter view is presented alongside the result. The example given is a report that ‘Man United won 2-0’. It would be more interesting if they did. Imagine a Spurs or an Arsenal supporter robustly denying the result, claiming that the opposition had scored two also but the referee had not blown the whistle.

It is interesting how the climate change issue has been handled so delicately by the BBC over two decades. Fran Unsworth is quoted as commenting on the response from young people to the BBC on the issue. It is over thirty years since my children were influenced on environmental matters by the Rain Forest campaign promoted by the pop star Sting. Yet the BBC, whilst reporting such campaigns and events such as the Rio, Paris and Copenhagen conferences, still failed to see the wood for the trees.  I suppose it is better to come late to the party than never attend at all. 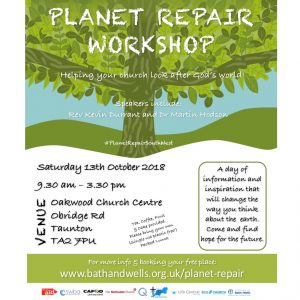 My response, as a scientist, is to ask: What proportion of BBC reporters, journalists and programme producers have a science degree?  I worked at a university that ran a journalism course, but it was always an undergraduate course. No amount of reporting practice, no amount of research of scientific topics, will ever equate to a science degree education.

My next response was to reflect on the John Ray Initiative’s role in the area of climate change, environment care and related issues. Soon the work of Operation Noah, Climate Stewards, the CRES course and A Rocha came to mind….. and so much more church activity responding to the challenges of environment care. Rather than ‘coming late to the party’ the Christian response to these issues has been to teach and educate, to take action and to challenge attitudes. Each organisation does so in its own way, generating a multi-faceted approach that churches and Christians across the globe have drawn on and been inspired by.

I read the original report of the BBC’s change of policy as I was booking a place on the Planet Repair Workshop that takes place on the 13 October in Taunton, Somerset, promoted by the Bath and Wells Diocese (and half a dozen other major Christian organizations).  While the BBC is catching up, the Christian community is again looking forward, ahead of the ball game; seeking to educate rank and file church members on how they can mitigate the effects of the damage to the Earth’s ecological balance.

Dr Andrew Wright was a medical science lecturer in Hong Kong and Edinburgh. He is a Director of JRI.