“The New Climate War” is a brilliant, brilliant book and you should all go and buy it and read it! Having said that I am not going to do a “traditional” review (there are many of those appearing at the moment), but rather I will reflect on Michael Mann’s book from my own life and experience. And then I have one, overarching, but tangential BIG QUESTION which merits a separate blog.

For those of you who don’t know, Michael Mann was one of the scientists behind the famous “hockey stick” graph, showing a rapid increase in global temperature since the Industrial Revolution. It was first published in 1998 and became an iconic graph, much used by the IPCC, and promoted by the late Sir John Houghton, the former President of JRI. The graph featured very strongly in the “Hope for Planet Earth” climate change tours of the UK in 2008 and 2009. Sir John and I collaborated on putting together the science presentation for the tour. In the end, I did our presentation over 100 times. The tour had a punishing schedule, and Sir John was well into his 70’s by then, but he came to a number of the presentations and we interviewed him. I explained Michael Mann’s graph over 100 times, but all I knew about him at the time was that he was an American climate scientist. That all changed in the latter part of 2009 when Mann became embroiled in the “Climategate” affair. Emails were stolen by hacking into the server at the University of East Anglia. Then short sections were snipped out by climate sceptic groups purporting to show that Mann and his colleagues had massaged the data to produce the hockey stick. The scientists were exonerated by several reviews, but considerable damage was done just before the crucial COP15 meeting in Copenhagen. Mann later wrote of his experiences in Climategate and other battles over the science of climate change in his 2012 book, “The Hockey Stick and the Climate Wars”.

A number of questions seemed to come up every day from the audiences on the “Hope for Planet Earth” tours. One concerned whether we needed individual actions or governments to tackle climate change. We often had people saying that there was no point in waiting for governments to act, and we needed to do it for ourselves. We also had questioners who said there was no point in individual actions unless governments acted. The correct answer is that we need both, and that is still correct today, but it has become more and more obvious that without systemic change, requiring government support, we will not get very far. One only has to look at the change in carbon dioxide emissions in 2020 during the lockdowns. Even at their peak, lockdowns only led to a drop in emissions of about a quarter, and over the whole year we had around a 7% drop compared with 2019 (Le Quéré et al., 2021). So even when economies ground almost to a halt and we stopped flying and radically cut driving most of the emissions were still happening.

Time has moved on and Michael Mann is now a well-known advocate of climate action who is very active on social media, particularly Twitter. In his latest book, “The New Climate War”, he only spends a short time on the science of climate change. Mann sees Climategate as having been a watershed, and after that attacks on the science gradually declined. There are still people who are sceptical of the science, but they are very much at the fringes now. The science is solid, but we are also seeing a lot more of the effects of climate change- extreme weather events, melting of ice caps, sea level rise. It is far more difficult to promote sceptical arguments about the science nowadays. Back in 2015, my wife, Margot, and I published “The Ethics of Climatic Scepticism”, and in that we could already see that the fossil fuel lobby was switching tactics away from attacks on the science. Now, in 2021, Mann sees the new climate war in these terms: “It includes an array of powerful Ds: disinformation, deceit, divisiveness, deflection, delay, despair-mongering, and doomism.” Mann explains how all of these can be used by the fossil fuel lobby to slow down or prevent action being taken on climate change. I will just briefly mention two, deflection and doomism. 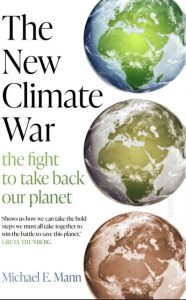 Going back to that question about whether we need personal or government action. Both are good, but I had not totally realised that deflection onto personal action could be used as a tactic!! Mann has lots of examples, but basically the idea is that big business tries to suggest that any problems with their products are the responsibility of the consumer. So instead of taking action themselves, they make individuals carry the can and feel guilty if they are unable to solve things. And of course, it can lead to divisions between environmentalists who focus on personal actions and those who seek systemic change, which is a perfect recipe for inaction.

Then doomism. I have seen a lot of it! It is very easy to drift into the idea that whatever we do now, we are all doomed to live in some sort of climate apocalypse. Sometimes, I feel a bit like that myself, and even Michael Mann admits he falls into it at times. In Christian circles, it can often be tied to eschatological views (we won’t go there!). But however it comes about it is highly dangerous, as it disables action. Again, the fossil fuel lobby loves doomism.

But what is wonderful about this book is that after all of his battles Michael Mann is still an optimist. He repeats it over and over again. Humanity is not defeated, and climate change is not impossible to deal with. A typical statement: “Don’t forget, once again, to emphasize that there is both urgency and agency. The climate crisis is very real. But it is not unsolvable. And it’s not too late to act.”

Great book, which really gets you thinking. Maybe too much thinking, and it brought into focus for me the one BIG QUESTION that is tangential to the main theme of the book, but I believe is vital that we get right. That is the subject of a separate blog.

And here we are at St Nicholas, Newbury with the JRI stand and bookstall!!

We’re back! Today we were over 100 000 on the strike in Berlin and 620 000 in Germany alone along with many others all over the world, asking world leaders to #UprootTheSystem . There were strikes in over 80 countries! #FridaysForFuture #ClimateStrike

Today we are at St Nic's, Newbury for their 'Green' church open day (10.15am to 4.00pm). JRI Operations Director, Dr. Martin Hodson, is speaking at 11.30am and we have a bookstall and display all day. Do come and see us if you are in the area!! ... See MoreSee Less
View on Facebook
· Share

We are very pleased that "A Christian Guide to Environmental Issues" by Martin and Margot Hodson has been selected by the Big Church Read! There are now videos and a set of questions to accompany each chapter. Ideal for your church group this autumn! thebigchurchread.co.uk/a-christian-guide-to-environmental-issues-2/ ... See MoreSee Less

A Christian Guide to Environmental Issues - The Big Church Read

Environmental sustainability is a major issue for us all. The Rt Revd Graham Usher, Bishop of Norwich, and lead bishop on the environment for the Church of England in his commendation for “A Christi...
View on Facebook
· Share

The latest JRI blog post is by the President of JRI, Dr Mike Morecroft, and is entitled "IPCC publishes new report on the Physical Science basis of Climate Change":jri.org.uk/ipcc-publishes-new-report-on-the-physical-science-basis-of-climate-change/ ... See MoreSee Less