As part of the Christian Climate Observers Program and as a fellow researcher of the PUCV’s Law of the Sea Centre, I have been an observer during the first week of the UN Climate Change Conference COP 25.

This conference is taking place under the Presidency of the Government of Chile and is being held with logistical support from the Government of Spain. Originally, COP25 was going to take place in Santiago (Chile’s capital), but because of the turbulent times in my country, the civil unrest and the violations of human rights against the Chilean people, the Government of Chile had to withdraw from hosting COP25. However, the country continues to preside over the summit, as initially planned, and also to uphold the mantle of the first Blue COP, in an effort to bring the ocean more firmly into the climate negotiations.

The Blue COP focuses on the importance of “the Ocean and Cryosphere in a Changing Climate” as a recent IPCC report has highlighted. In fact, the High-Level Panel for a Sustainable Ocean Economy has established that “the ocean is a dominant feature of our planet, covering 70 per cent of its surface and driving its climate and biosphere. The ocean sustains life on earth and yet is in peril from climate change. However, while much of recent attention is focused on the problems that the ocean faces, the ocean is also a source of potential solutions and innovation”.

Since the beginning of COP25, several oceanic, marine and coastal events have been carried out among the different pavilions in the Blue Zone (for parties and observers) and in the Green Zone (for the general public). In this context, the COP25 presidency is assessing the importance of the ocean during the conference, and how it can be included in the Nationally Determined Contributions (NDC’s) and emphasize its significance in the implementation of the Paris Agreement. Actually, Carolina Smith, the COP25 president and Chile’s Environment Minister, has said that “there exists an important relationship between the ocean and the climate, and we need to address it and take action urgently: the ocean absorbs almost 30% of all the emitted CO2 and the 90% of the additional heat caused by the climate change. The ocean is suffering devastating consequences that we must face as soon as possible”.

As the Secretary of the Because the Ocean Initiative, Remi Parmentier, proposed in the Opening of the Spanish Pavilion’s Ocean: “protecting the climate and the ocean are ultimately two sides of the same coin. The ocean is taking the heat from climate change, both literally (without the ocean’s heat-trapping function there would be no life on our planet) and figuratively (increased ocean temperature is affecting marine ecosystems and the services they provide; the increased concentration of CO2 is changing the chemical composition of the ocean with associated consequences for the marine food web; the melting of ice sheets is causing sea-level rise and associated consequences for coastal communities, ocean-related extreme weather patterns are more frequent and stronger, and so forth)”. 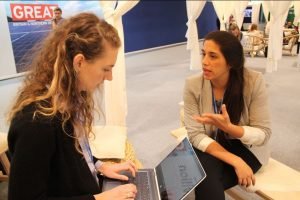 Chile has said that the Blue COP must be built between all the parties and stakeholders that are committed to generating a better dialogue to integrate the relationship between the ocean and the climate under the UNFCCC Convention. In this sense, some coastal countries such as Costa Rica, Indonesia and Fiji, among others, have expressed their interest in integrating the coastal blue carbon in their NDCs, GHG inventories and, even more, add an annex to UNFCCC Convention that will recognize specifically the major role of the ocean in climate change.

As the slogan of the COP 25 says “Time for action is now”, it is foreseeable that Chilean declarations -as the COP25 presidency and the leader of the Blue COP- will be coherent with its actions.

Rocío Parra is a lawyer and works in the Law of the Sea Centre at the Valparaíso’s Catholic University (Chile). During 2019 and 2020 she is living in Alcalá de Henares, Spain, as Rocío is doing her PhD research on “Protection of the coastal and marine spaces from an environmental law viewpoint”. She joined the Cross Current Environmental Sciences group in 2018.