It’s mid-May, mid-lockdown, and I’m sitting in my peaceful garden listening to the blackbird singing. I am feeling accomplished, having just submitted my CRES dissertation, and about to start a new book which I have been looking forward to reading for some time.

Braiding Sweetgrass: Indigenous wisdom, scientific knowledge and the teachings of plants by Robin Wall Kimmerer didn’t disappoint. The book is a beautifully written collection of essays spanning topics about natural history, ecological science and indigenous wisdom, which I greedily devoured in between home schooling, home working and household chores.

Robin Wall Kimmerer is both a mother, a Professor of Environmental Biology in Syracuse New York, and a member of the Potawatomi Nation. Her dual perspectives of indigenous knowledge and scientific learning offer a fascinating perspective on significant issues affecting our times. She explores subjects often held in tension, such as colonialism and indigeneity; spirituality and empiricism, in the context of environmental understanding and management.

The first essay immediately grabs the attention by contrasting the Native American creation story with the Genesis creation story. The Native American story features Skywoman falling to earth, being caught by geese and allowed to rest on a turtle’s shell. As she danced with thanksgiving to the animals, land grew around her feet. Skywoman held in her hand seeds from the tree of life in Skyworld, which she scattered on the land and, together with the animals, Skywoman nurtured the garden which provided for all their needs. We all know the Genesis story, and can see the similarities: a woman, a tree, a garden. But that story ends quite differently: banishment from the garden and hard toil to eat the land’s fruits. 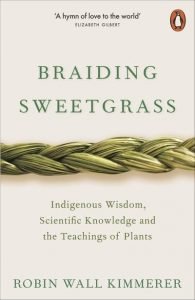 Kimmerer does not offer an opinion on which story might be truth, but she does point out that stories matter: ‘cosmologies are a source of identity and orientation to the world, they tell us who we are’. She is intrigued about this juxtaposition of spiritual beginnings when the descendants of Skywoman and Eve met in North America. One group of people living in deep communion with the land, another group looking to subdue and dominate the land: ‘the land around us bears the scars of that meeting, the echoes of our stories’. Not for the first time, as a Christian, I am challenged.

Kimmerer’s family lost the ability to speak Potawatomi two generations ago, when her grandfather was taken to a colonial boarding school at a young age and beaten for speaking his native tongue. As an adult she has started to learn the language, and been struck by how every plant, animal, rock and river is referred to as a person, not an object; a verb and not a noun. Although this is a difficult concept for English speakers to understand, it makes sense when you think that the natural world is alive. You would never speak to a person as ‘it’, that would be disrespectful. Potawatomi language shows the same respect to trees, mountains and water as it does to family members. When language reminds us of kinship with the natural world, it demonstrates a deeper level of respect.

In ‘Burning Cascade Head’ Kimmerer poetically describes an indigenous ceremony of burning a grass meadow on the clifftop to welcome the salmon back, lighting their way to the estuary. The people would watch the fish for four days before any were caught; only then was the elder permitted to catch one fish and prepare it for a feast. Once the fish was eaten the bones were carefully placed in the riverbed, head pointing upstream, directing the other fish where to go. Kimmerer then mourns the treatment of the river in modern times. The estuary was drained for grazing, so the salmon had no brackish waters to acclimatise their bodies to the freshwater. Vast numbers of salmon were taken and the population crashed; industrial fish farms were built causing an increase in disease and pesticide pollution (‘they thought they could make salmon without rivers’). Further upstream dams were built, preventing migration of any wild salmon left. She then questions, who is ‘developed’, ‘scientific’, ‘sustainable’? There are so many ecological benefits from the indigenous ceremony: a botanically diverse clifftop meadow which acts as a fire break between forests, sustainable harvesting of fish stocks, careful stewardship of all the habitats required by the salmon through the whole lifecycle. The ceremony demonstrates an excellent understanding of the ecosystem, and equally importantly, it is an act of respect and love for the land. Thankfully the science has now coalesced with indigenous understanding – in recent years the estuary has been dechannelized and intricate networks of channels are developing brackish wetlands. The salmon are slowly returning.

This book weaves ancient stories from indigenous culture with modern environmental tragedies and restorations, interspersed with funny stories from fieldwork, and beautiful personal accounts of childhood and motherhood. It made me laugh and cry, and I learnt much about plants and people. Kimmerer concludes that there is a role for science and spirituality in environmental management. I will leave the last word to her: ‘for what good is knowing, unless it is coupled with caring?’

Hannah Gray has recently completed the CRES course. She is a mum to two children and works at the University of East Anglia, managing environmental research projects in developing countries. Prior to this she worked in conservation management at the Broads National Park. She is member of Light of Life Baptist Church on the east Norfolk coast.