How about it Church of England? – I’ll stop funding climate abuse if you do too

My hands were shaking as I clumsily felt around in my pocket for the cable ties. Dropping one on the floor I clenched the next one tighter and I pushed it through the hole in the material, yanking it firm to the bar. My heart was pumping in my chest as we exchanged nods and with one push the banner unfurled over the railing of the balcony. Eyes started turning and I could see a determined security force striding over towards us. We belted out the lyrics of Amazing Grace and then we were out.

On the 11th February 2015, myself and two others dropped a banner from the balcony of Church House during the General Synod. It read:

“‘We are young Christians. For us and our children, climate change is the biggest threat we face. Please pray and act for all those afflicted by climate change now and in the future. As a church community, we cannot continue to invest in fossil fuel companies. So, we ask you, on our behalf, to divest now. ’May God defend the afflicted among the people and save the children of the needy’ (Is. 24:2-5)”.

The Church of England has significant investments in Shell (£101 million), BP (£91.9 million) and ExxonMobil (Esso in the UK). These investments are financing the extraction and burning of fossil fuels – producing gases which smother our worlds biosphere, fundamentally changing our climate.

It is important to care about climate change because it is an issue which affects us all. However, it does not affect us all equally. Climate change is having a disproportionate effect on our worlds’ poor. In many countries around the world, people are being stripped of the opportunity to provide food, water and safety for their families. This forces them to be dependent on aid from less climate change-affected areas, such as the UK.

The act of inflicting harm or injury on another person is abuse. Climate abuse is leading to the desperation and death of millions of people around the world. By investing money in fossil fuel companies, the Church of England is being an enabler of this abuse. The immorality of this state of affairs is recognised by the British public. In a 2017 ComRes poll commissioned by Christian Aid, 78% of respondents said that they thought investing in companies that cause climate change was morally wrong. 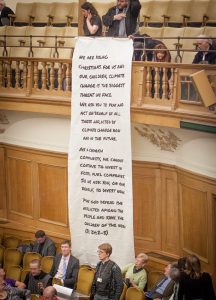 I dropped the banner in Church House because I cared passionately about Jesus’ Church. I had a thirst for our Church to be a thriving force for authenticity, justice and love. It pained me to see how far it has strayed and that it is once again embroiled in another controversy of abuse to vulnerable people.

Having now had three years to reflect, I don’t regret my actions. The Church of England puts forward the view that “engagement” with fossil fuel companies may coax them in the right direction. However, with so many lives at stake, it is important to ask whether this strategy can have the necessary effects in the required time. At Shell’s May AGM, church investors backed a resolution calling for the company to set carbon emission reduction targets in line with the Paris Agreement. After Shell’s management opposed this resolution, it received only 5.5% shareholder support. On the other hand, Shell is showing real concern in response to the divestment movement. In their most recent annual report, the company itself admitted that divestment campaigns and climate litigation could have an effect on their profit margins and business practices.

It brings me joy to see that divestment from fossil fuel companies is a trend which is picking up pace around the globe. At the start of July 2018, more than 890 institutions, worth about £4.7 trillion, had made commitments to divest. Several churches and church organisations have made commitments to divest fully from fossil fuels, such as the Church of Sweden, the World Council of Churches and the Anglican Church of Southern Africa.

I stick by my view that the Church of England has a duty to divest its assets. However, I have also had time to acknowledge and accept my own contribution to the problem. I have been so concerned with the actions of the Church of England that I failed to notice my own money being used to finance fossil fuels. I don’t have shares in the industry. However, I do have HSBC as my chosen bank. This bank has billions of pounds invested in the fossil fuel industry.

The presence of this inconsistency highlights the contradictions that are present in all our lives. None of us need to be perfect in order to engage in campaigning, but I have decided that its’ time to stop dragging my feet on this particular issue. I pledge to move my money away from HSBC into a bank which is doing better. I pledge to join the Christian Aid campaign called the Big Shift, in order to write to HSBC, telling them why I am moving my money away from them.

So how about it Church of England?  I’ll stop funding climate abuse if you do too.