I am not a vegetarian. Two weeks ago I attended a consultation on Agriculture and Climate Change arranged by the Agriculture and Theology Project. It was a good and wide-ranging meeting, and no doubt detailed reports will come out in due course. However, one thought has been nagging away at me ever since, that cutting meat consumption might really be a good way of reducing greenhouse emissions. Of course this idea has been around for a while. So Meat Free Mondays have become popular, and Tearfund and other organisations frequently advocate eating less meat in their Carbon Fasts. But do we have enough knowledge to say whether it is actually a good idea to cut meat consumption?? And if it is a good idea how do we carry it out? And what about our farmers? I have a lot of friends who are farmers and the last thing I would want to do is to cause them a lot of trouble without good reason.

I gained one clue from a presentation at the ATP consultation by Prof Bob Rees (Scotland’s Rural College – SRUC). He highlighted a recent report looking at agricultural emissions and potential ways of cutting them. There are a lot of things that can be done to reduce emissions from agriculture. So we can change the diet of ruminants so that they produce less methane. It might also be possible to genetically modify their gut bacteria to this effect, but of course this would be rather controversial! There are lots of changes to soil management that can help. But in the end the report reckoned that it would be easier to attack the demand side than the supply side, and that there were bigger and quicker gains to be made by tackling food consumption. 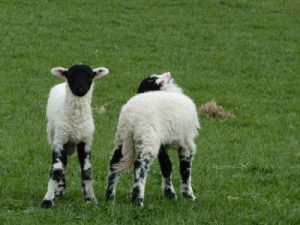 Soon after my return from the consultation I spotted a recent paper entitled “Food choices, health and environment: Effects of cutting Europe’s meat and dairy intake” by Henk Westhoek and team. It is free to download! The authors examined the consequences of replacing 50% of animal-derived foods in the European Union with plant-based foods. They found that this would lower saturated fat intake by humans to the maximum recommended level (we are currently way above the maximum, and hence an increase in obesity), decrease nitrogen emissions by 40%, and lower greenhouse gas emissions by 25–40%. Moreover, a decreased consumption of meat and dairy would turn the European Union into an exporter of cereals.

We do not only have to consider the implications of cutting consumption of animal products for greenhouse gas emissions and human diet. Human population is now over 7 billion and is predicted to rise to over 9 billion. It is much easier to feed that growing population if they eat less meat, rather than more, and the energetics of eating vegetables is much better.

So it seems that the scientific evidence is now beginning to stack up in favour of decreasing meat and dairy consumption in an effort to decrease greenhouse gas emissions, and for several other reasons. But is the science now totally reliable, or is more research needed? At the consultation I suggested that we needed to apply the Precautionary Principle here. In 1992 the United Nations Framework Convention on Climate Change (UNFCCC) stated that, “Parties should take precautionary measures to anticipate, prevent or minimize the causes of climate change and mitigate its adverse effects. Where there are threats of serious or irreversible change, lack of full scientific certainty should not be used as a reason for postponing such measures.” So if we adopt that Principle we should start to cut meat and dairy consumption even though we have not got a full picture.

Of course cutting meat consumption is not without problems. How do we convince the general public that it is a good idea? What do we do about the uplands and other places that are only really suitable for animal production and where arable farming will not work? What about the farming community? And more questions I am sure….

An indiscriminate cut in meat consumption seems to be a bit of a blunt instrument, but the overall principle does look to be correct. What to do if you are not a vegetarian (or vegan)? For some years now we have eaten less meat and more vegetarian meals, but when we do eat meat we go for better quality, preferably from local producers. More recently we have cut our cheese consumption. A bit of a compromise, perhaps, and as more data come in on this topic we may need to revise our position. Hopefully by then we will have answers to some of the questions raised above.

Young Christian Climate Network are organising a Relay to COP26 to show how young adults care about climate justice.
Could your church support walkers with accommodation and hospitality?
Details of the 750 mile route here: https://www.yccn.uk/
@baptistuniongb @YCCNetwork

Brrrrr... Frigid for some but we were a cold blob on a warm planet. Europe hogged the cold in April 2021, making it one of the chilliest Aprils in decades.

But this is not the situation everywhere. This is where it is good to know the difference between weather and climate.

Are we making progress or is the emission gap as big as ever?

According to current policies, we are 𝐰𝐚𝐲 of track...

"Integrating creation care into mission planning in a post-Covid urban setting." We are pleased to announce the publication of JRI Briefing Paper number 42 by Shelly Dennison. Shelly works for CPRE and is a second-year CRES student. jri.org.uk/briefing-paper-42-mission-planning-in-post-covid-urban-communities/ ... See MoreSee Less

Our latest JRI blog post is by Dr. Mike Morecroft, our new JRI President, and is entitled "Science, Faith and Action: Responding to the climate and biodiversity crises" jri.org.uk/science-faith-and-action-responding-to-the-climate-and-biodiversity-crises/ ... See MoreSee Less

Praying for Our Planet. Seven scientists talk about their science, their faith and the climate and ecological emergency. A series of webinars organised by Bramhall Methodist Church. The first of these, at 7.30 pm on Wednesday 12th May, is by JRI President, Dr Mike Morecroft, and is entitled "Climate Change, Nature and Us". Please book ahead!www.bramhallmethodists.org.uk/pfop-programme ... See MoreSee Less

Praying for Our PlanetSeven scientists talk about their science, their faith and the climate and ecological emergency Speakers have been chosen to represent a range of different scientific backgrounds and stages in their careers. They will give an overview of their area of expertise and then talk ab...
View on Facebook
· Share

We are very pleased that the consultation that we helped organise and the subsequent report that came out last week have been featured in the Church Times:www.churchtimes.co.uk/articles/2021/16-april/news/uk/theological-education-institutions-should-fo... ... See MoreSee Less

THEOLOGICAL education must be updated urgently to include teaching on the environmental crisis, if c...
View on Facebook
· Share