Nature is connected and complex, but at the same time surprisingly simple if you are looking at it in the right way. This might sound like a contradiction, but let me try to explain why I like to argue this is not a contradiction. A hot topic at the moment is the changing climate where we are living in. You could argue about what is causing this, argue how to mitigate it or simply just ignore it, however that is not what I want discuss here. Climate change is showing really clearly that nature (the earth) is connected. A lot of human activities at one side of the world can literally have an effect at the other side of the world, hence melting ice caps at the poles for example. The mechanisms behind this effect are quite complex, but it is clear, human-induced activities create a kind of unbalance and this is visible at places almost nobody lives. The earth as a system is not just a static dead piece of rock flying through our solar system, it is alive and there is life. This is an example to show nature is complex. However, during my studies, I also learned that nature can be simple and behaves in amazingly structured ways. 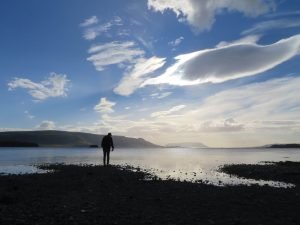 In the past centuries, a lot of great scientists changed our lives as we know them today, with laws and equations according to which our world behaves. People always were amazed by nature and in old literature, this was often expressed in poetry. However, in more recent history we got to know that the earth goes around the sun, that we have a (global) water cycle and we discovered the exact equation for why things fall down. This is not finished, and still today a lot of seemingly complex systems are explained by scientists, often in a quite simple way. I don’t want to suggest science is simple, but on the other hand, if a model or theory is more complex it does not mean it is better. I would even like to argue, the simpler a theory or model, the better it is understood what it describes. In the same way, a teacher can explain something better if he/she knows exactly what is happening.

Of course this is easier said than proven, however, I think the main reasoning behind my argument is more a metaphysical question of why does nature behave the way it does? Is everything completely random or is everything in one way structured and let us say not random. If the former is the case a lot of things being simple is just a coincidence, with the latter however these observations confirm structured behaviour. Whatever is your personal thought about this question, science of course still needs to be independent. However, I think having bigger questions in mind can guide in finding the answers to complex problems. Personally, finding out why nature behaves the way it does is my biggest motivation for research. Also, I think one reason why things sometimes appear simple could be that everything is not completely random. As scientists, we cannot solve the question of why nature behaves the way it does on our own, but with our own contributions, bit by bit we get closer. And purely looking to science, I do not think it matters what we think regarding the randomness of our earth and life as it is. As long as we continue unravelling nature, it will show its true self eventually.

Justus is a PhD student in micrometeorology at the University of Göttingen, Germany. He obtained his BSc. and MSc. at Delft University of Technology, The Netherlands, graduating in hydrology. Justus joined the Cross Current Environmental Sciences group in 2018.