We were sorry to hear that Revd. (Donald) Keith Innes died on 15th December 2020 at East Surrey Hospital, aged 87, after a long illness. Here we will briefly cover his life story before concentrating on his environmental work.

Keith was born in Sussex. He took a degree at St. John’s College, Oxford in 1956, going straight on to train for the Anglican ministry at Clifton Theological College in Bristol (one of three colleges that later formed Trinity College, Bristol). While there he took a Bachelor of Divinity (London). Keith was ordained in 1958, and then served two curacies (common in those days) in Chelmsford and London dioceses. In 1965 he was appointed as Rector of Gayton Thorpe in Norfolk. Keith was there for five years and then had a succession of posts as vicar in the Guildford and Canterbury Dioceses. He retired in 1997, and settled in Ringmer in East Sussex. Keith’s wife, Gill, died in 2014, and he was not in great health himself by that time. At the time of his death, Keith had three children and three grandchildren.

We do not know exactly when Keith first became interested in environmental theology, but Revd. John Whitehead recalls that he was involved with both the Rural Theology Association and Christian Rural Concern (CRuC) in the 1980’s and 1990’s. John considered that, “he was part of the wider circle of green theology enthusiasts, rather than being actively involved in leadership”. John Neal also remembers Keith: “His involvement with CRuC was, on reflection, very considerable through his papers and tutoring. The lone voices of the 80s and 90s are now in the forefront of national minds.” How true! Barbara Echlin also wrote with memories of Keith: “He was a quiet revolutionary. Very much ahead of contemporary thinking. Edward (Barbara’s late husband) and I first met him thirty-odd years ago when he set up a CEL (Christian Ecology Link, now Green Christian) local group in Kent and they invited Edward to give a talk. When Keith retired he and Gill moved close to us in Ringmer, where he set up another local CEL group.” As far as we are aware, Keith’s first major publication on environmental theology was a Grove booklet in 1987: “Caring for the Earth- The Environment, Christians and the Church”. This has a surprisingly contemporary feel. It begins with a brief look at environmental issues, and then has sections on ethics, Biblical theology, models of theological thought, and Christian responses. Add in a little more emphasis on climate change, and it could easily have been written today! It is interesting that Keith thanks the famous scientist/theologian, Arthur Peacocke, in the acknowledgments for his guidance and encouragement.

In his retirement, Keith became more active in this area, not less. Barbara Echlin again: “He spent the first three years of his retirement making notes each Sunday on the readings in the three-year lectionary – on the things the preachers could have been saying! He offered these ‘green pointers for preachers’ to CEL/Green Christian. We still have them on our website and they are still relevant.” Keith undertook an M.Phil. degree (2001), working on wilderness in the Old Testament under Dr. John Bimson, at Trinity College, Bristol. He continued work on this theme, and later published it on his website as “The Old Testament Wilderness in Ecological Perspective. A Christian Investigation” (2008). John Bimson recalls: “It was a privilege to be asked to supervise Keith’s M.Phil dissertation. I had been hugely impressed by his far-sighted Grove booklet, and rightly anticipated that I would learn as much from Keith as he would from me. He was a delight to work with – widely-read, full of quiet wisdom and sharp insights, both theological and ecological.” 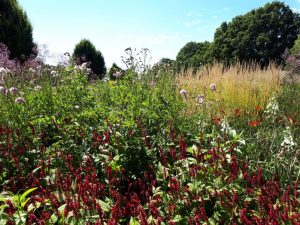 I (Martin) only really became aware of Keith Innes after 2009, when I became Operations Manager for JRI, so very much in his declining years. Although he was limited in his mobility he had a remarkably active brain, and supervised one of our CRES students who gained a distinction for her work. His first briefing paper (No 17) for JRI was “British and American Attitudes to Nature”, produced shortly after my arrival in 2009. Keith’s interest in the Old Testament continued and we published JRI Briefing Paper No. 28 “God, the Earth and Humanity in the book of Micah” in 2014. He expanded this work as “The Holistic Message of Micah” and published it on his website in 2016. But the thing I remember most about Keith is his continual stream of blog posts that he produced for JRI. In the early years of the JRI blog we often struggled for material, but just when I was despairing we would ever get anything, Keith would send in his latest contribution. Keith wrote 13 in total, mostly on aspects of Old Testament theology, and the last one appeared on 28th January 2019. By that time Keith was not at all well, but that did not stop him from producing a blog post for JRI!

Keith was a very humble man. Every blog he sent in was prefaced by, “if you think it would be good enough” or a similar phrase. But as you can see from the above, he was well ahead of his time. His work may not always be the best known, but his influence was very considerable. He is one of those unsung heroes of the Christian environmental movement, and we owe him a great debt of gratitude.