David Attenborough’s recent BBC documentary, Extinction: The Facts, was a stark warning about biodiversity loss. Pulling no punches, it examined the causes and consequences of a global crisis, taking us from Brazil to Africa and China.  Like many viewers, I was left with a mixture of emotions – anger, fear, and sadness. The big questions at the end of the film were what can I do and where is hope to be found?

English Pastoral zooms in on one small corner of England and provides one answer to those questions, whilst raising some more of its own.  Rebanks lives in Matterdale in Cumbria, farming Herdwick sheep and Belted Galloway cattle, both of which are well adapted for northern upland conditions. He examines the changes in farming over his lifetime, reflecting on the way he, his father, and grandfather have farmed their land.  The story is not a romanticised tale of rural life but one that deals honestly with the stresses and challenges of everyday farming life across three generations, the rise of industrial farming, and the economic pressures facing the sector. The themes of family, community, and tradition are woven through the whole book, not as things that are static but as things that evolve and change.

In the final third of the book, we follow the journey to a wilder farm, with plenty of places for nature. Rivers are ‘rewiggled’ and trees planted. Wildlife appears – voles, otters, wildflowers bloom, fish spawn in the beck, birdsong can be heard overhead. The surveying and practical work is being done in partnership with local environmental organisations, breaking down some of the traditional animosity between farmers and ecologists by opening up dialogue. The aim is to create a patchwork of diverse farmland habitats with managed grazing regimes and healthier soil. River corridors are being fenced off and blanket peat bogs restored. 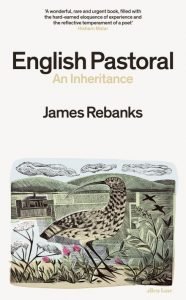 One of the threads that I found most interesting was the reflection on limits and constraints. The history of farming is, in Rebanks’ words, the ‘story of people trying and often failing to overcome natural constraints on production.’ He quotes the gleaning laws from Leviticus 19:9 as part of an insightful discussion on the importance of moderation and balance; drawing out the interconnected nature of the impacts of farming choices on families, rural communities, farmed animals, and wild nature. Finding where the limits lie is not as easy as it might appear, one question cited as an example is when does a combine harvester become so efficient that it leaves too little grain for overwintering birds? We often don’t realise that we have breached the limits until it is too late and, as in this example, the curlews and corncrakes have disappeared.

Rebanks is a thoughtful writer and one of the big questions that seems to emerge for him and us is how can we live more simply and quietly, within ecological limits, in a noisy, consumer-driven society?

A second theme that runs through the book is the idea of being rooted in a place and as a consequence knowing and understanding the land. There is a poetic side to the descriptions of walking the boundaries of the farm or pouring over field names on old maps and indeed Rebanks writes ‘our land is like a poem, in a patchwork landscape of other poems, written by hundreds of people’ but there is also the reality of understanding what will grow in which field because of the type of soil and what wildlife thrives where. This connection to the land is contrasted with modern consumers who are often removed from the realities of farming and food production. Rebanks is an advocate of local food and restoring the connection between consumers and farmers, enabling conversations where knowledge and values can be exchanged.

Ultimately this is a book that challenges readers to think about some serious questions – what sort of farming system do we want? Are we prepared to pay a true price for food produced in a way that is good for wildlife? What can we do to challenge the systems that govern our choices?  With Brexit trade deal negotiations underway, these are timely questions.

English Pastoral is a hopeful, nature-filled, reply to Extinction: The Facts but it doesn’t let us off the hook. Dragonflies, minnows, and barn owls dart through the pages, they should be reminders that if we like the vision of wildlife-friendly farming then we all have a role to play in supporting it.