I have hesitated to write this month’s blog.  But this is a journey and so with fellow travellers, I think I need to be honest.  I’ve been travelling quite a lot over the past month.  Some of it greener than others.

I travelled “greenly” by train to the South Eastern Baptist Association ministers conference in the beautiful setting of Ashburnham Place.  I was there to speak on Climate Change and how we need to respond as disciples of Jesus.  It was encouraging to discover an awareness of the issues around the environmental crisis among the ministers there.  And an openness and eagerness to think how to join in with God’s delight over and care for creation, seeking as disciples to live in-step with God’s redemptive “hope that the creation itself will be liberated from its bondage to decay and brought into the freedom and glory of the children of God.”  (Rom 8v21)

But I had to start my talk with a confession.  Not all my journeying over the past month had been so green.  The day before, I landed back in the UK after a two-week trip to New Zealand.  I was there to speak at two Messy Church conferences about Messy Church Does Science – using simple science experiments to encounter the wonder of creation and the creator.  A trip that has made me aware of the tensions between our lifestyles and the need to care for creation

New Zealand has a vast, beautiful and awe-inspiring landscape.  In North Island, the geysers in Rotorua display the raw energy of creation, while the majestic mountains of South Island speak of the power of God.  It’s a landscape too that reminds us of how humans affect the environment and not just our recent generations.  Before the arrival of the Maori people around 700 years ago, the land was covered in forest, home to some truly remarkable bird species including the Giant Moa.  A flightless bird taller than a human being, sadly, now extinct due to hunting and deforestation.  You do not need power tools or a bulldozer to destroy forests and cause extinctions – just stones, axes and centuries.  Environmental degradation was enhanced by the arrival of European settlers a few centuries ago, with their more efficient technology, together with sheep and cattle.

People in New Zealand are very aware of living with climate change.  It came up often in conversation – more than in the UK in my experience.  Walking around the streets of Christchurch I happened upon a public installation making people aware of the dangerous impacts of climate change caused by a global temperature increases above 1.5 degrees centigrade.  And wherever I went, people commented: “it’s not usually this brown – normally its green”.

They have had little rainfall since the later part of 2019.  The drought has been part of the same weather system than brought extreme conditions to Australia and led to the vast forest fires.  Thankfully, over the past month these have died down, not due to human intervention, but the coming of rain.  And while in New Zealand, there have been few fires they have not been unaffected.  In one of the sessions I led at the conferences, I showed a satellite picture of the Earth with clouds of smoke covering New Zealand.  Through the rest of the day, people came up to me to show me pictures of when the sky turned yellow due to the smoke from Australian fires over a thousand kilometres away.

Yet, while people in New Zealand are very aware of climate change and its effects, they face a dilemma.  It may be ok to travel around in a camper van when you have three weeks or more to slowly wander around the country on holiday.  But the reality of everyday life is that in order to stay connected, flying can seem the only option given the scale, the difficulty of traversing the landscape and the sheer distance of New Zealand from other lands.  And while the distances we travel within our own country are much smaller, in our own ways we are much the same. 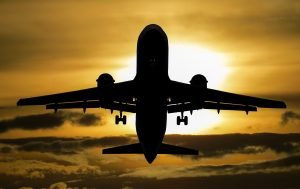 There are ways that we can try and make flying greener through offsetting.  Encouragingly on the bottom of my ticket, the airline tells me how much carbon-dioxide my flights to New Zealand have generated – 2.5 tonnes.  An acknowledgement that flying contributes to climate change.  A sign that global business is starting to take the issue on board.  And helpful to me too in my own journey towards freedom.  I can ease my conscience by paying to offset my carbon, supporting initiatives that reduce other emissions or increase carbon capture, like planting forests.  While not ideal, it’s a start in helping us to be more aware of how we are impacting our world.

So, off I go to the Climate Stewards offsetting website www.climatestewards.org.  Linked to the excellent Christian environmental charity A Rocha, it estimates how much travel and our lifestyle choices contribute to the growing amount of carbon dioxide in the atmosphere that is driving climate change.  So, I enter in my flight details and they estimate my travel has released not 2.5 but 6.5 tonnes of carbon dioxide!  Confused!  Well, yes.

So, who do I believe?  Reading around this there are lots of factors to be considered.  The airline’s estimate is based on their industry carbon calculator and appears to only account for the amount of fuel burned.  Climate Stewards, on the other hand, include the overall impact of the carbon dioxide released based on figures provided by the UK government to help businesses estimate their carbon footprint.

Yet despite this knowledge, I feel a tension within me.  Which figure should I take heed of?  One will cost me more than the other.  How much am I willing to pay for the impact my life is costing the environment?  Yes, I think Climate Stewards are probably right.  And we want to play our part.  But when it comes down to the nitty-gritty issue of money, well that can cause us to pause and think.  And in the years ahead we are all going to have to face up to the cost.

While now there is increasing awareness of the issue of climate change, there is a fear in the back of my mind whether we will be willing to count the cost.  I remember that after the global financial crash of 2008 and the failure of the UN Copenhagen Climate Summit in 2009 to agree measures, climate change went off the public agenda.  It was too expensive to tackle.  Other issues seemed more immediate.  As I write, the global economy is being shaken by fear of the coronavirus, whether that fear is warranted or not.  We need to remember the words of Jesus – “Give, and it will be given to you. A good measure, pressed down, shaken together and running over, will be poured into your lap. For with the measure you use, it will be measured to you.”  (Luke 6v38)  Words we need to keep in mind when it comes to responding to both the coronavirus and the environment.

The seventh step towards freedom of addiction recovery programmes is “humbly ask God to remove our shortcomings.”  It recognises that lasting change can only come through the work of God within our lives.  At the minister’s conference, in the Q+A session, one person reminded us of a quote that has been circling on Facebook attributed to Guth Speth, an American environmental lawyer;

“I used to think that the top environmental problems were biodiversity loss, ecosystem collapse and climate change.  I thought that with 30 years of good science we could address these problems.  But I was wrong.  The top environmental problems are selfishness, greed and apathy and to deal with those we need a spiritual and cultural transformation.  And we scientists don’t know how to do that.”

But surely those of faith do.  Inner transformation is at the heart of what the Christian faith is all about.  For “we know that our old self was crucified with him so that the body ruled by sin might be done away with, that we should no longer be slaves to sin – because anyone who has died has been set free from sin”  (Rom 6v6,7).  As John White the Christian psychiatrist reminds us “freedom from guilt is what constitutes the real beginning of profound change … the discovery that I am loved and accepted … a deep awareness of forgiveness … sets me free to be holy” (John White, Changing on the Inside, 1991, pg. 167).

I don’t know how you will respond to this month’s musing.  But, on this journey towards freedom I will ask God to continue to remove my shortcomings.  When it comes to caring for creation there’s clearly still work to be done.  I will offset, and not penny-pinch!  And I will ask him to help me be as generous as I can be to the world that he has generously shared with me.

This is the seventh blog in a 12 part series from Dave Gregory. To read the first post ‘Addicted’, please click on this link.

Rev Dr Dave Gregory is Ministry Team Leader at Croxley Green Church, a former President of the Baptist Union, and co-ordinator of Messy Church Does Science. He is a JRI Director.