If research into the psychology of persuasion and behaviour change has taught us anything, it’s that a message is not just a message. As marketing and advertising agencies are well aware, many factors play a part in how it is received, such as who says it, how they say it, what they say and whom they say it to. And while their stock flies off the shelves, this purchasing frenzy makes it even more important that we spend some time thinking about how we can deliver a more imminent message – the need for a more sustainable world.

So what messaging is currently popular when engaging the public to act more sustainably?

This is the narrative which paints nature as a wilting damsel in distress – a fragile and dependent character, with the human race as her only hope. As we don our superhero capes, we are told to “save the bees”, “save the trees” and, for our final trick, to “save the world”.

Now, one benefit this narrative creates is to spike our motivation to engage in the short term. The more self-satisfaction and achievement we attach to an action, the greater dopamine boost we get from it and the more likely we are to partake. This is probably why this method is most used for campaigning activities – where a large number of signatures are sought over a relatively short period of time. However, how effective is this messaging for understanding the world around us and gaining a realistic depiction of our place in that world? You only need to look at the beautiful wildflowers that somehow manage to grow their way through the tarmac on our concrete roads to realise that, if left to its own devices, nature would quickly restore itself to its former glory. Furthermore, with humans being the primary cause of environmental destruction, how helpful in the long term is a narrative which acts to increase the human ego even more? 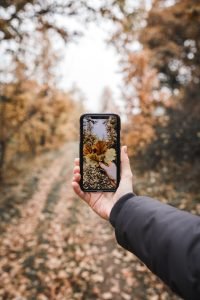 The other extreme that messaging falls into is one of blame, where humans play the role of the irredeemable villain “destroying the environment”. While this might be a successful way of venting anger at ourselves and our fellow humans for acting so despicably, it rarely has the effect of evoking sympathy from the non-converted. Instead, the process of cognitive dissonance tells us that the exact opposite might be the case – that people are triggered to dismiss narratives in which they are depicted as immoral.

This messaging also ignores the subtleties and complexities of why an individual may engage in damaging behaviours. The COM-B model (Michie, van Stralen & West, 2011) outlines that for behaviour change to take place an individual needs to have three factors – the capability, opportunity and motivation for the new behaviour. If any of these elements are not present, behaviour change will not occur. The difficulty with dwelling on where the guilt of the issue lies, is that people may disengage from the message before they have had a chance to explore which of these factors they need to address in order to act more sustainably.

Overcoming the problem of polarisation

What these narratives both have in common is that they are very polarised. While humans are viewed as active figures (either good or bad, saving the world or destroying it), nature is depicted as a static and separate entity. These portrayals therefore not only strip away the wonder of nature but alienate people from the very thing that we are encouraging them to connect with.

We must promote the awe and excitement of nature if we stand any hope of encouraging people to care for it. It is also important that we reflect the intimate connectedness between humans and their surrounding environment. This can be achieved through highlighting the local effects of issues like climate change and even through our choice of pronoun (using “our” instead of “the” environment). The power of this can be seen in the phrase “we are destroying our environment” – where the choice of grammar changes the depiction of humanity from irredeemable villain to that of a confused and vulnerable child in need of guidance. This creates a mindset which is much more receptive to behavioural change.

Finally, as anyone who has ever trialled a new years’ resolution knows, behaviour change is difficult. Introducing a new habit takes perseverance, effort and a whole lot of failing and trying again. This means that the primary message that we all need to hear is one of encouragement. If we hold back on the temptation to put out polarised messages, we can create narratives that are more dynamic, inviting and sympathetic to the complex individuals we all are. We can create safe spaces, where people feel able to be honest about their shortcomings in order to receive the support they need to act differently.